Two recent Africana Studies majors were named Rhodes scholars in back-to-back years—Emmie Mediate in 2016 and Alex Coccia in 2015. Emmie, who studied abroad in London and spent three summers conducting global health research in Uganda, used her Rhodes Scholarship to pursue a master’s degree in evidence-based social intervention and policy evaluation. Alex, who wrote his senior thesis on conflict reconciliation in Rwanda, chose a master's in comparative social policy. Learn more about these two outstanding students below. 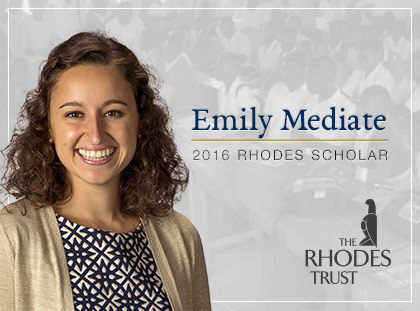 “The most important thing Notre Dame has instilled in me is a sense of concern for others. A lot of the passion I have for the work I do in Uganda and for my future goals comes from a desire to be in solidarity with others, a concern for the common good, and just a sense that there is something bigger out there to fight for—and I want to be a part of that.”

Emmie, who graduated from Notre Dame in 2015, majored in Africana studies and Arts and Letters pre-health, with a minor in international development studies. After interning as a junior desk officer at the U.S. State Department in summer 2015, she began a yearlong International Development Fellowship through Notre Dame’s Kellogg Institute for International Studies. In that role, she worked with the Association of Volunteers in International Service in Kampala, the Ugandan capital, to evaluate a USAID-funded program that aims to improve the well-being of children in HIV-affected families. Emmie, who began her graduate studies at Oxford in fall 2016, hopes to pursue a career as a foreign service officer with the U.S. State Department. 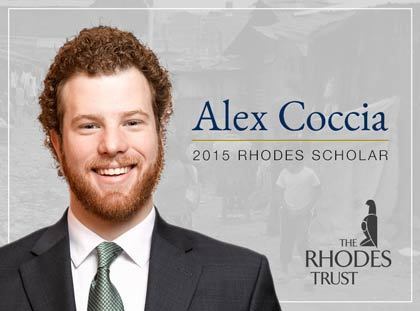 “I am deeply grateful for the support and invaluable mentorship I’ve received over my time at Notre Dame—from faculty, staff, and my fellow students. The mission of the Rhodes Trust is reflected in our own, to engage critically so that learning becomes service to justice. The academic experience in Africana studies and peace studies taught me to apply those shared values to ‘fighting the world’s fight.’ I look forward to continuing this journey at Oxford.”

Alex, who graduated from Notre Dame in 2014, majored in Africana studies and peace studies and traveled to Africa twice as an undergraduate. After his freshman year, he taught fencing to schoolchildren in Uganda as a volunteer with Fields of Growth International. The following year, he returned to East Africa to conduct more than 60 interviews for an independent research project on the legacy of reconciliation in post-genocide Rwanda. At Notre Dame, Alex also was a varsity fencer and student body president. He says his interest in social policy grew naturally out of his studies at Notre Dame, which focused on inclusion in many forms. “My academic experience in Africana Studies and Peace Studies helped me begin to ask the right questions that I could apply to my work in the [Progressive Student Alliance] or in student government,” he told The Observer in 2015. A recipient of the prestigious Harry S. Truman Scholarship, Alex completed a yearlong fellowship with the U.S. Department of Health and Human Services ­­before beginning his studies at Oxford in fall 2015. He is interested in a career in politics and international human rights law.